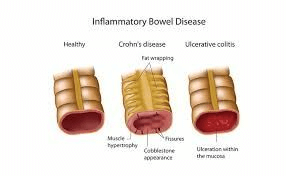 There has been marked increase in the number of people diagnosed with IBD, over the past decade. A recent Center for Disease Control and Prevention (CDC) study revealed that up to 3.1 million Americans may suffer from chronic gastrointestinal conditions, almost triple the amount cited by previous government reports. These figures are especially disconcerting when you consider the fact that IBD was still considered to be a relatively rare disease at the start of the 20th century.

While the exact cause of IBD is still unknown, many medical researchers posit that changing lifestyle habits and stricter food safety standards have directly contributed to an overall decrease in microbial resistances. When triggered by specific genetic and environmental factors, these weakened immune systems can develop dysfunctional responses that lead to inflammation across the digestive tract. The result is conditions like Crohn’s disease, ulcerative colitis (UC), and less widespread conditions that fall under the umbrella of IBD such as: microscopic colitis and diverticulosis-associated colitis.

SYMPTOMS OF IBD
Although Crohn’s disease and UC display similar symptoms that are often difficult to distinguish from one another, these symptoms manifest in different areas of the body. While UC is confined to the large intestine and colon, Crohn’s can show up anywhere across the gastrointestinal system from the mouth to the anus. In some cases, the disease can even cause issues with other organs such as the eyes and liver.

Common symptoms of these diseases include:

· Due to the malabsorption of nutrients in the intestines, you may be at risk of developing anemia, arthritis, gallstones and weakened bones.

IBS
IBD should not be mistaken for IBS. Although both of these conditions affect the gastrointestinal tract and show similar symptoms, IBS does not cause inflammation, ulcers or other forms of structural damage in the GI tract.

TREATING IBD AND IBS
Unfortunately, there is currently no cure for either of these chronic conditions. Modern treatment is largely focused on managing symptoms in a variety of ways depending on the severity of the disease and specific symptoms.

Medications can range from common antibiotics to new biologic treatments and corticosteroids; in severe cases, patients may be treated with steroid such as prednisone, however these drugs can have serious side effects. Medical practitioners may also recommend specialist diets that include supplements, and certain natural curatives such as fish oil and probiotics. Many people also advocate stress management techniques such as yoga and CBT for relief. In worst case scenarios, patients may need to undergo surgery to fix strictures, fistulae, or persistent intestinal bleeding.

MEDICAL CANNABIS FOR IBD AND IBS
The link between medical marijuana and gastrointestinal conditions likes IBS and IBD is largely down to the endocannabinoid system (ECS). The ECS helps to regulate a range of biological functions including: pain, immune responses, memory, mood, hunger, and digestion in the GI tract. Whenever the ECS needs to stimulate a region of the body it will release chemicals called endocannabinoids which react with cannabinoid receptors in areas like the brain, fat, muscles and intestines.

Marijuana also produces cannabinoids upon ingestion, so it can tap into the same regulatory processes that are usually controlled by the ECS. This is especially important for IBD and IBS patients because many medical researchers have implicated that the role ECS plays in modulating inflammation, digestion and visceral sensations in the gut, suggests that the system can be leveraged to treat IBD.

The Research
In 2010, UK researchers looked into effects of THC and CBD treatments in rodents suffering from colitis-related inflammation. The results showed that both substances helped to reduce inflammation, while also minimizing instances of diarrhea. While further human trials are sorely required, scientists claim marijuana’s natural analgesic properties might be extremely effective in treating the chronic pain that often results from IBD and IBS.

At MMR-NY we’re set up to help qualifying patients gain access to medical marijuana in New York. Our registered practitioners can perform a comprehensive assessment and set you on the path to gaining your medical marijuana license in just one remote appointment. Contact owner, Lauraine Kanders, NP today to find out more.